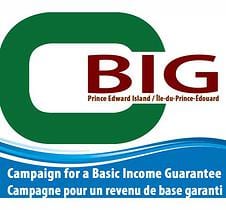 Following the declarations of support for a basic income guarantee by Mayor Don Iveson of Edmonton and Mayor Naheed Nenshi of Calgary, the Prince Edward Island (PEI) Campaign for a Basic Income Guarantee (C-BIG) has called on the provinces’ politicians to seize this political momentum for a basic income. All four political party leaders in PEI have gone on record in support of basic income, and C-BIG hopes to generate enough momentum for basic income to culminate in a pilot project in PEI.