Researchers in several Dutch municipalities are preparing experiments to test the effects of the removal of conditions on social assistance. Although not testing basic income per se, the experiments will examine one of its key attributes (the reduction of conditionality).

This year, popular sources have occasionally continued to report that the Dutch city of Utrecht is preparing to launch–or has already launched–a pilot study of universal basic income (sometimes continuing to cite a now-outdated article published in The Atlantic in June 2016). In this light, it is particularly important to clarify the facts surrounding the Dutch social assistance experiments.

It is true that researchers have proposed experiments in several Dutch municipalities that will examine the effects of reducing conditions on welfare benefits, including the removal of job-seeking requirements and a lessening in the amount benefits are reduced with income. However, as explained below, these experiments will not test a full-fledged basic income. Moreover, at the time of this writing, none of the municipal social experiments have been launched: those in Groningen, Tilburg, and Wageningen are awaiting approval from the Dutch Ministry of Social Affairs; meanwhile, the experiment in Utrecht has been delayed indefinitely, having been denied approval by the Ministry.

The Dutch Participation Act, enacted in 2015, imposes conditions on recipients of social welfare that are intended to promote their reintegration into paid employment. For example, beneficiaries are typically required to complete five job applications per week, attend group meetings, and participate in training activities in order to continue receive cash assistance.

Researchers at Utrecht University School of Economics, such as Loek Groot and Timo Verlaat, have criticized the conditions and sanctions imposed by the Participation Act from standpoint of behavioral economics. Research in behavioral economics has demonstrated, for example, that performing tasks for monetary rewards can “crowd out” individuals’ intrinsic motivation to perform such tasks. Furthermore, deprivation and fear of losing benefits may engender a scarcity mindset that impedes rational decision making. Drawing from such findings, researchers like Groot and Verlaat have hypothesized that reducing conditions on welfare benefits would better promote individuals’ reintegration and productive contributions to society (see, e.g., “Utrecht University and City of Utrecht start experiment to study alternative forms of social assistance,” last accessed May 6, 2017; note that the start date mentioned in the article, May 1, is no longer accurate).

The social experiments proposed in Utrecht and other Dutch municipalities have been designed to test the above hypothesis: randomly selected welfare recipients (who agree to participate) will be randomly assigned either to a control group or a treatment group, one in which reintegration requirements on receipt of benefits will be removed. (Although the exact design of the experiments has differed between municipalities–and between versions of the proposal–all have included a treatment group with the elimination of job-seeking conditions. Proposals experiments have also included groups with different interventions, such as, in several recent versions, increased reintegration requirements and relaxation on means-testing; see below.) These treatment groups will be compared to a control group, as well as a reference group composed of individuals not selected for the experiment, with respect to outcomes such as labor market participation, debt, health, and life-satisfaction.

Meanwhile, however, researchers must grapple with another consequence of the Participation Act: the law limits the extent to which they are legally permitted to test alternative welfare policies. For one, as mentioned in a previous Basic Income News article, the Ministry of Social Affairs has required that the municipal officials overseeing the experiment must check after six and twelve months to determine whether experimental subjects have made sufficient efforts to find paid work. At these times, if an individual has been found to have undertaken too few employment-promoting activities, their participation in the experiment must be ended. This constraint reintroduces some degree of conditionality even for treatment groups in which the requirement to participate in reintegration activities has been lifted from social assistance.

In addition, the Ministry has also requested that experiments include an additional treatment group in which stricter reintegration requirements are introduced. The experiments proposed for the municipalities of Tilburg, Wageningen, and Groningen, are currently under review by the Ministry, include such a treatment group; the initial (and unapproval) design of the Utrecht experiment did not.

Largely for political reasons, proponents of the Dutch social experiments have avoided the use of the term ‘basic income’ (‘basisinkomen’ in Dutch), with researchers in Utrecht calling their proposed experiment by the name ‘Weten Wat Werkt’ (English: ‘Know What Works’). (In the Netherlands, “basic income” is often associated with the stereotype of “giving free money to lazy people”.)

This avoidance is apt, however, since the experiments have indeed not been designed to test a universal and fully unconditional basic income. The designs of the experiments have either not been finalized or are still pending government approval (see below). Regardless, however, it seems certain that any of the experiments (if approved) will test policies that differ from a basic income in several key respects. First, the population of the experiment is not “universal”; participants are to be selected from current welfare recipients (as is also the case in Finland’s Basic Income Experiment, launched on January 1, 2017, which has also been designed to test the labor market effects of the removal of conditions on welfare benefits for the unemployed).

Furthermore, within the treatment conditions themselves, the benefit will remain means-tested and household-based (rather than individual-based), in both respects unlike a basic income. In all designs proposed to date, participants within all treatment groups will have their benefits reduced if they take a paid job during the course of the experiment. However, the Tilburg, Wageningen, and Groningen experiments, as currently planned, will include a treatment group in which benefits would be reduced at slower rate (50% of earned income instead of 75%).

In the latter respects, the Dutch municipal experiments bear more similarity to the Ontario Basic Income Pilot than Finland’s Basic Income Experiment [1]. While the Finnish pilot is indeed investigating non-means-tested benefits paid to individuals, the pilot studies in Ontario and (if approved) the Netherlands will continue to work with programs in which the amount of benefits depend on income and household status; however, in all cases, many conditionalities on benefits will be removed in some experimental conditions.

Despite these differences, some view the Dutch social assistance experiments as a possible step toward a full-fledged basic income. Moreover, as seen above, the experiments have been motivated largely by arguments from behavioral economics that have previously been invoked in arguments in favor of the unconditionality of basic income (see, e.g., the 2009 Basic Income Studies article “Behavioral Economics and The Basic Income Guarantee” by Wesley J. Pech).

Status of the Experiments

In contrast to some rumors and media presentations, none of the proposed social assistance experiments in the Netherlands has yet been launched.

The experiment in Utrecht, which had earlier in the year been to declared to have a launch date of May 1, has been deferred. According to a statement about the experiment on the City of Utrecht webpage, “The Ministry of Social Affairs and Employment has indicated that we need to do the experiment in a different way. We are discussing how we can conduct the study.”

Researchers are currently considering alternative designs of the experiment that will bring them into compliance with the Participation Act, and no new start date has been announced.

Meanwhile, the Ministry is reviewing experiments proposed in Tilburg, Wageningen, and Groningen, with an announcement expected later in May. As previously mentioned, these experiments have been designed to avoid conflict with the Participation Act, as had been one concern with the originally proposed design of the Utrecht experiment.

Basic Income News will publish a follow-up article of the Dutch municipal experiments, including further details on their design and implementation, after their final approval by the government.

Thanks to Arjen Edzes, Ruud Muffels, and Timo Verlaat for information and updates, and to Florie Barnhoorn and Dave Clegg for reviewing this article.

[1] I am here using these terms as proper names given by the respective governments, despite the differences between the experimental programs and a basic income as defined by BIEN. 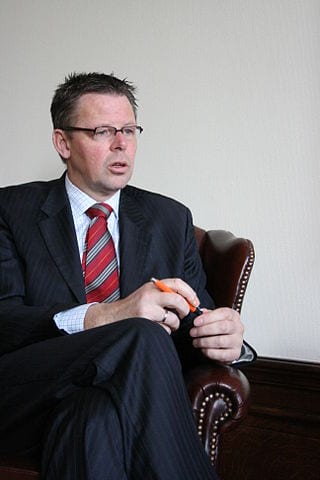 In a column originally published in the Volkskrant on May 31, Doekle Terpstra — former chair of the CNV trade union federation, an independent grassroots organization with over 350,000 members — declared that it’s “time for a new social contract, a new balance between economic and social interests.”

To continue to put our faith in the current approach and the institutions that go with it is not an option. It would be natural to call upon the social partners – unions and employers – to work together and draw up a future-proof social agenda.

A new social contract could bolster their credibility but it takes courage to leave the trodden path. I have my doubts about the innovative power of the consensus economy and the discussion will have to take place elsewhere. The partners in this discussion will have to be prestigious economists, entrepreneurs, workers and a commission of wise men. It’s time to roll up our sleeves and prepare a social contract for a new cabinet.

Terpstra suggests that such a contract could include, among other elements, a basic income or “some form of negative income tax” to secure a “viable financial basis” for all persons regardless of employment status.