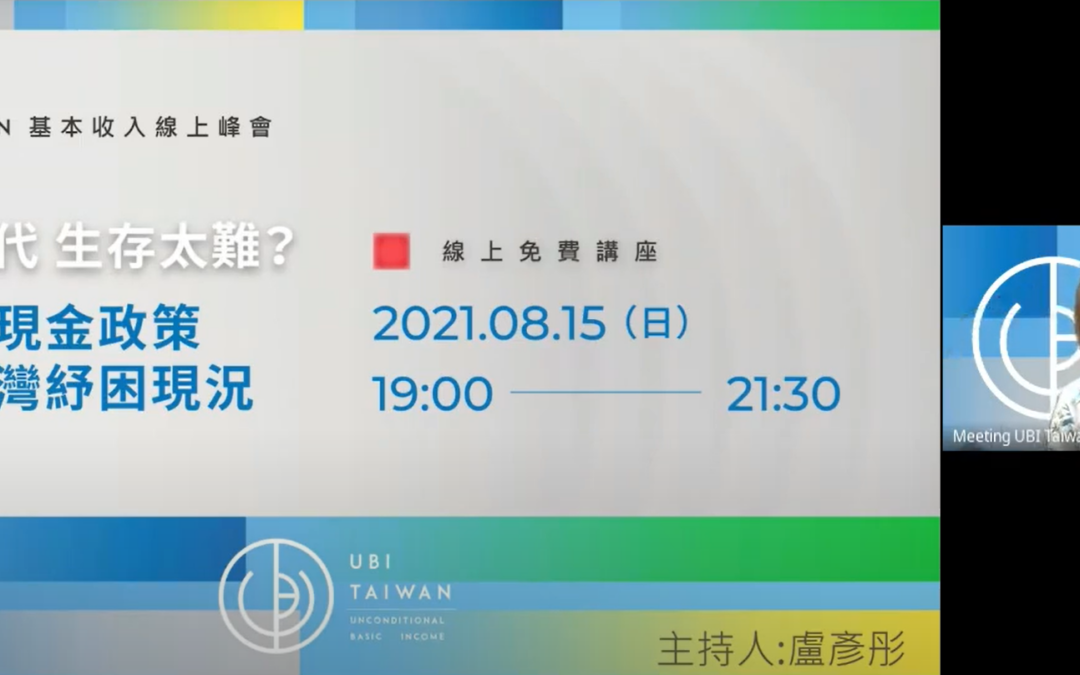 After over a year of avoiding significant local COVID outbreaks, Taiwan experienced a scare in May with hundreds of cases emerging. This brought the idea of universal cash payments to the forefront of Taiwan’s political debate as millions of jobs were destabilized overnight.

With this backdrop, UBI Taiwan held its first-ever online basic income summit on August 15, inviting professors, activists, and politicians from around the world to discuss the state of basic income during the COVID pandemic.

Korea’s Gyeonggi Province Governor Lee Jae-myung opened the summit by noting the importance of the basic income movement in Korea and Taiwan. Lee is currently a frontrunner in the early stages of Korea’s presidential race. He has been called the “Bernie Sanders of Korea” because of his economic proposals.

“When the world is implementing expansive fiscal policy, basic income is gaining attention as the most rational and remarkable way to prepare for the era of the fourth industrial revolution,” Lee said in his address to the conference.

As the former mayor of Seongnam, Lee started a youth basic income program for all 24-year-old youth in the city to receive local currency every quarter. The scheme was shown to improve small business activity in the region. He later expanded the program to the province when he became governor.

Kim Kyeong Soo is part of the Gyeonggi provincial government vision planner. He is the planner of the provincial youth basic income program.

“What we are doing at our expense is to realize the basic social rights of young people,” Kim said in an interview for the conference.

This was a useful model during the COVID crisis because the provincial government was able to quickly expand the program to include all residents of the province during the economic downturn.

Kim also discussed how they increased a myriad of programs during the COVID pandemic and the plans to push for basic income on a nationwide scale.

“We designed it so that it could only be used in stores with annual sales of 1.2 billion won or less, so that the money could be actually revitalized for the small business owners of the real alley economy,” Kim said.

Members of the Basic Income Korea Network Mok Hwakyun and Kim Jae-seop attended the summit for the question-and-answer session. They noted how basic income has become a mainstream topic in Korea.

“The biggest change is that everyone knows about basic income now,” Mok said. “I hope Korea will be the first country” to implement UBI.

Prominent US activist Scott Santens gave a pre-recorded interview for the conference where he discussed the success and failures of America’s massive COVID relief program. One of the biggest changes that has emerged is the Child Tax Credit, which Santens said he believes will get more people on board with a wider basic income safety net.

“I feel hopeful that especially the monthly CTC is going to really change things here and help build momentum for a full UBI here in the US,” Santens said.

Taiwan’s Yangming University Professor Song-Lih Huang discussed the debate between Universal Basic Services compared to basic income. He concluded that UBS does not provide the same level of individual freedom as UBI.

The situation became more severe this past May when a local outbreak caused Taiwan to go into level 3 lockdown for the first time during the pandemic. Taiwan is experiencing a bizarre contradiction, where record economic growth is fueled by its strong export sector despite the lockdown for other industries. At the same time, the lockdown has caused Taiwan’s employees to experience their worst economic situation in decades, particularly for the service industry.

As a result of the lockdown, half of Taiwanese experienced wage reductions of 10 to 50 percent, and 74 percent reported some reduction in wages. At the same time, 41 percent said they believed the government’s COVID relief program provided no help. One issue with the relief program is it relies on extensive documentation to prove an individual’s circumstance and can also reject an applicant if a household member has too much money in the bank.

For example, Taiwan’s unemployment had reached 570,000 people and the number experiencing lower than normal working hours had reached nearly one million during the lockdown. However, only 20,000 people were added to unemployment benefits during June which is less than one-fourth of the increased unemployment for that period.

Level two lockdown has been extended until September 6 in Taiwan, which places varying levels of restrictions on how businesses operate and closes some businesses entirely, such as certain entertainment venues. Even as much of the country returns to normal, many businesses will likely experience continued restrictions on their operations as well as reduced demand for the foreseeable future.

Despite one of the worst employment situations in decades for Taiwan, the government has only allocated around 6 percent of its annual GDP on COVID relief this year. Compared to Japan and the United States, which spent between 16 to 30 percent of their GDPs on COVID relief, Taiwan has given significantly less to its citizens as a developed economy.

Taiwan’s ruling party Democratic Progressive Party is moving toward another round of stimulus coupons worth 5,000 NT ($180 USD). Due to the stringent conditions associated with COVID relief programs, the universal coupons are the most accessible program from the government’s COVID response for many families. There has been a strong push by opposition parties in Taiwan to provide cash relief now for most Taiwanese instead of coupons and use the administrative savings to give an additional cash boost to poor households.