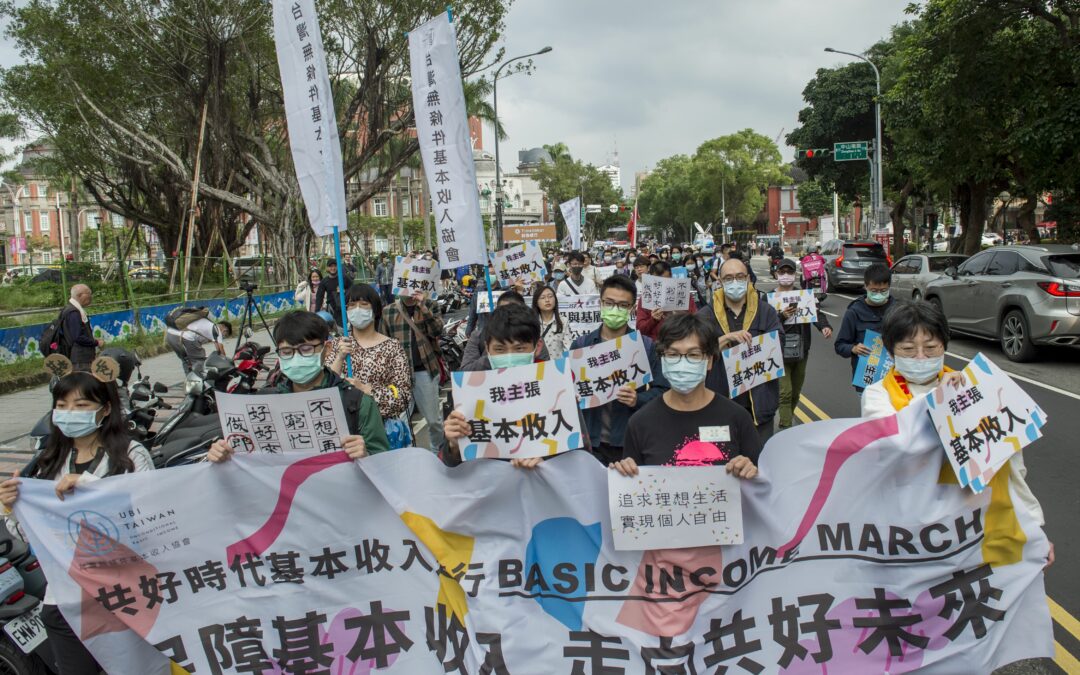 Taiwan held its first-ever basic income march on Sunday, attracting over 100 participants to rally in front of Taiwan’s Legislative Yuan. Current and former legislators joined the march led by UBI Taiwan, calling for greater discussion of a youth dividend and guaranteeing the right to a basic livelihood for all Taiwanese.

A prominent national legislator in Taiwan People’s Party, Tsai Pi-ru, gave a speech at the opening of the march in front of the Legislative Yuan. She said she attended because she wanted to show her support for Taiwan’s young people who are “bravely” speaking out. Tsai discussed the possibility of using a carbon tax and dividend as a step toward basic income.

“While participating in the basic income parade today, I saw young friends stand up. They are courageous to stand up for a new idea that is easily misunderstood,” she said.

UBI Taiwan informally began in 2016 and was formally established in 2018. In that time, the group has held three international conferences and produced multiple white papers analyzing methods for implementing basic income. Most recently, UBI Taiwan released a white paper advocating for an emergency basic income, meeting with legislators in early 2020 to discuss the possibility of including cash transfers in Taiwan’s stimulus measures.

The organizers said there were three main demands of the march: guarantee the right to basic subsistence, protect a sense of economic security, and prevent working families from being trapped in low-paying jobs.

As the global pandemic continues to rage on, Taiwan has not experienced a local transmission for over 200 days which allowed the rally to take place without restrictions. Nonetheless, march organizers said the economic uncertainty caused by the pandemic created a new urgency for the basic income discussion in Taiwan. Despite expecting modest growth overall this year, Taiwan has experienced uneven effects from the global downturn which disproportionately harmed low-income families.

Former national legislator and magistrate of Tainan county Su Huan-chih said at the march that promoting the basic income system will help young people increase their flexibility and opportunities in choosing jobs, and will also help the unemployed maintain their dignity.

“When people no longer have to worry about their basic necessities, they can make longer-term plans for their lives and they can engage in more creative and public welfare work,” Jhang said.

According to Tsai, many of the criticisms against basic income were made 30 years ago when Taiwan began implementing its early social welfare system. At the time, she said many were worried social welfare would bankrupt the government. But welfare is not the area where Taiwan’s government is wasting money, she said.

“The biggest problem is that the government wastes money to build a lot of large and improper construction projects and unused government buildings. These wasteful projects create debt and harm the natural environment,” Tsai said.

Prior to the march, prominent basic income scholars from around the world sent their advice and well wishes to Taiwan including Sarath Davala, the chairman of Basic Income Earth Network. Davala said that he hopes the basic income march in Taiwan becomes an “example” for other countries in the region.

“The march that is being organized in Taiwan is a sign of how strong the UBI Taiwan movement has come to and it has the capacity to provide and influence the government to adopt this innovative system,” Davala said.

“Now is the moment for a basic income movement and a basic income system. Brave politicians must take this opportunity and usher in a better society,” Standing said.

For Tsai, Taiwan’s first basic income march was a starting point for a larger conversation about how to reimagine Taiwan’s society for the future. She discussed how basic income could help address the problems of Taipei’s high housing prices and the displacement caused by Artificial Intelligence, while encouraging greater risk-taking and entrepreneurship.

“The great changes in the world start from small places. The world is always changing, and our imagination needs to be liberated,” Tsai said.

“I truly believe there is a real possibility to implement basic income in Taiwan and open up the unrealized potential among Taiwan’s young people,” Prochazka said.