United States: Andrew Yang is running for President in 2020 on the platform of Universal Basic Income 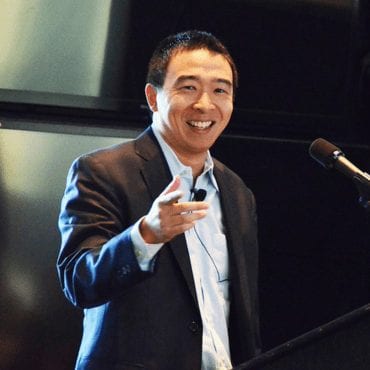 Andrew Yang is a young entrepreneur who is running for president on the platform of Basic Income. As an entrepreneur, he started and led several technology and education companies. More recently he founded Venture for America, “a nonprofit that places top graduates in startups in emerging U.S. cities to generate job growth and train the next generation of entrepreneurs.” Because of his varied experience, Yang travelled all over the United States and came face to face with the reality of several dreary and forlorn locations. In his new book, The War on Normal People, he describes visiting Detroit in 2010, when the city “was just beginning its descent into bankruptcy,” he remembers “cold, empty streets feeling abandoned,” and he saw the same in “Providence, New Orleans, and Cincinnati.” These experiences led him to create Venture for America, sending talented entrepreneurs to these cities in an attempt to create jobs and revitalize these areas. 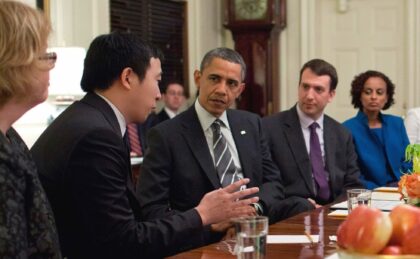 Even though Venture for America was highly successful, “people were clapping us on the back, congratulating us on our accomplishments,” but he thought: “What are you congratulating us for? The problems are just getting worse.” He realized that there is too much “human and financial capital flowing to just a handful of places doing things that are speeding the machine up rather than fixing what is going wrong.” Yang realized that technology was hitting the economic fabric of the country and “eliminating livelihoods for hundreds, thousands of the most vulnerable Americans.” This is the beginning of a wave he calls the Great Displacement, a wave that “grinds up people and communities” in ways that are not clear nor straightforward and that can lead to utter disaster – this reality is already partly responsible for the election of Donald Trump, and when it hits it will become even more frightening. Yang feels a sense of urgency, in the sense that we need to do something, “it’s getting late, and the time is running short.”

When asked about how he decided to run for president, he said: “What happened was that I saw Donald Trump get elected and realized that there is a very short window of time between now and when things get so bad that it is going to be difficult to easily reconstitute many of the regions [that are most affected and that elected Trump]. It was in 2017 and I decided that someone should run for President on Universal Basic Income and so I went around and asked who is going to do this? When I saw no one was going to do it, I decided to do it.” Yang’s platform is mainly focused on Universal Basic Income, but also includes Medicare for All and something he calls Human Capitalism. In Human Capitalism we would still have a free market, but would not be focused primarily on corporate profits, but instead should follow three central tenets: “1. Humans are more important than money, 2) The unit of a Human Capitalism economy is each person, not each dollar, 3) Markets exist to serve our common goals and values.”

In his book, War on Normal People, Yang paints a bleak view of automation. He predicts it will arrive soon and in full force, anytime between 2020 and 2030. Service jobs will be mostly automated as well as customer service jobs, construction jobs and jobs that include driving a vehicle. Recently the New York Times had a piece about the automation of retail, Retailers Race to Automate Stores, saying that there will be stores with “hundreds of cameras near the ceiling and sensors in the shelves help automatically tally the cookies, chips and soda that shoppers remove and put in their bags. Shoppers accounts are charged as they walk out the doors.” Customer service in call centers can be easily substituted by artificial intelligence (AI) so effectively that you may not be able to tell if you are speaking to a person or a computer. Many more intellectually based jobs such as accountants, insurance sellers and paralegals can also be more efficiently done by AI. One of the most worrisome areas where job loss will hit hard is driving a vehicle. Self-driving trucks and cars can displace many middle-aged males in the United States, in areas that are already hard hit by automation. The Great Displacement, according to Yang, is scary and happening fast.

One of the policies that can be immediately implemented is Basic Income, which Yang calls a Freedom Dividend. Yang’s proposal calls for $1,000 a month for each American, $12,000 a year. Yang suggests that the most efficient and quick way to finance a Basic Income of this kind is implementing a VAT – Value Added Tax, of around 10%, many European countries have a VAT around 20%. Yang believes a VAT is an adequate way to gather funds for Basic Income because it is charged on volume, not on profit, so that large retailers, such as Amazon, would not be able to escape it. Even though VAT would increase prices for all, when used exclusively for Basic Income it would lead to lower income people still benefiting from the policy. Yang said: “it’s going to help 85 percent of Americans, the only people that it doesn’t help are the top 15 percent who will be putting a lot more money into the VAT. The people that consume the most are the richest and with a VAT they can’t escape it, with income tax rich people are excellent at escaping it in various ways.” Yang also prefers it to a wealth tax as “people will start shifting wealth around in various ways” and would easily be able to avoid it. Yang also defends a Carbon Tax. 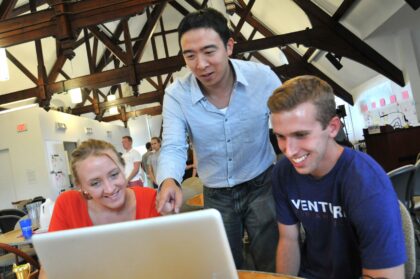 Yang has a vision of the future where, aided by a Basic Income, or the Freedom Dividend, local economies will thrive: “My vision for the future is of an artisanal economy that many people participate in, that is borne by human interests that are not trying to build the next Chipotle or Google. You create a bakery that everyone loves in your town and then you employ 10 people and everyone is happier because there is a very good bakery. Then you multiply that by a bunch of businesses. That’s the future to me. It’s impossible for more and more people to compete against the mega-corps, but when everyone has a Universal Basic Income, then we can all frequent business we enjoy. That’s the ideal vision and that’s what Universal Basic Income allows for.”

In the book, The War on Normal People, Yang speaks about time banking exchanges in local communities that already exist. According to him, that’s a way to address how people will spend their time in satisfying and productive ways, after automation arrives and Basic Income is implemented. In Brattleboro, Vermont, there is a time bank with 315 members that has already exchanged 64,000 hours of mutual work. With a time bank, each person offers whatever services they have and bank time that can be latter traded for other services that others offer within the community. It’s a way to stay busy, connected, and meet your community neighbors. Yang suggests something called Digital Social Credits, which would work in a similar way, connecting communities and providing a local exchange of services.

Yang’s campaign has started and he is ready for the challenge ahead. In his own words: “I’m going to run for president on Basic Income for the next two and a half years. The better I do, the more real Basic Income becomes for millions of Americans. We can run again in 2024, and 2028, until we win, if we don’t win this time.” Yang sees Basic Income as an urgent policy that needs to happen now as is willing to fight for it as a presidential candidate.