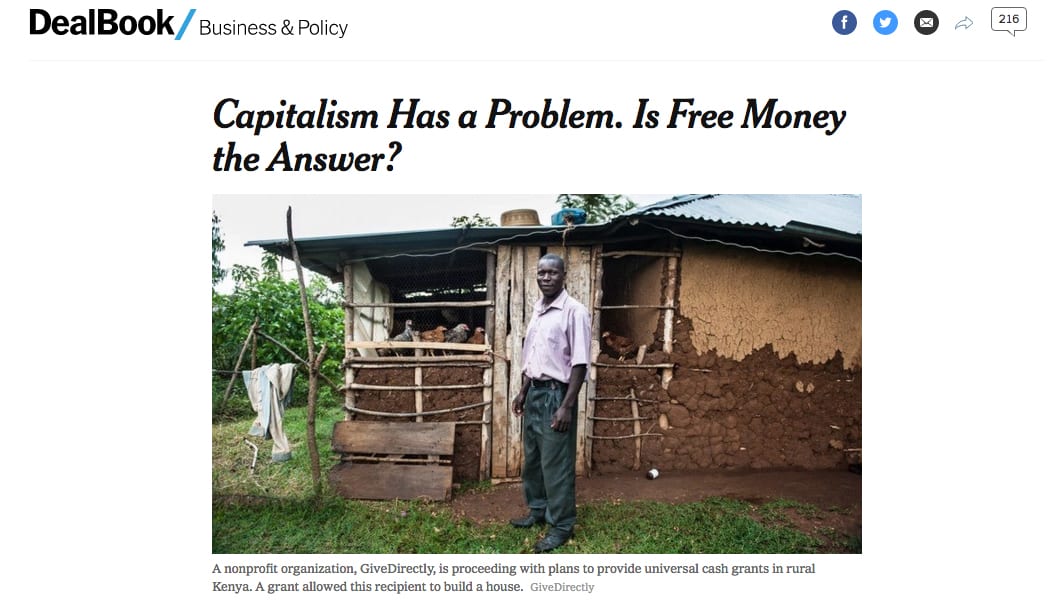 Peter S. Goodman, a veteran economics journalist, wrote a comprehensive piece about the recent Basic Income developments for the New York Times. In this piece, Goodman refers to the main motivations behind the idea of Basic Income as including the current wage stagnation, the lack of jobs to support the middle class and the threat of automation. The idea, Goodman says, is “gaining traction in many countries as a proposal to soften the edges of capitalism.” Basic Income can be use to insure “food and shelter for all, while removing the stigma of public support.”

Regarding how to finance Basic Income, Goodman says that the cost of Basic Income is a simple multiplication of amount of money distributed by the amount of people. He says: “Give every American $10,000 a year — a sum still below the poverty line for an individual — and the tab runs to $3 trillion a year. That is about eight times what the United States now spends on social service programs. Conversation over.” This argument however, has been challenged by several Basic Income researchers, including  Karl Widerquist, who is was interviewed and quoted in the piece. In his paper “The Cost of Basic Income: Back-of-the-Envelope Calculations”, Widerquist says that the cost of Basic Income is “is often misunderstood and greatly exaggerated.”  In the paper, Widerquist argues that a Basic Income of “$12,000 per adult and $6,000 per child with a 50% marginal tax rate” would cost “$539 billion per year: about one-sixth its often-mentioned but not-very-meaningful gross cost of about $3.415 trillion.“

Beyond the issue of financing, the article covers a lot of ground regarding current discussion of Basic Income and its motivation, as compared to other social security schemes. Goodman refers to the bureaucracy of social support and the poverty trap, when “people living on benefits risk losing support if they secure other income” and the idea that “poor people are better placed than bureaucrats to determine the most beneficial use of aid money.” The article also refers to the left wing worry that Basic Income could be an excuse to cut social programs, “given that the American social safety programs have been significantly trimmed in recent decades.”

The piece closes with an acknowledgement that Basic Income “appears to have found its moment” and a quote by Guy Standing, saying that, “The interest is exploding everywhere, and the debates now are extraordinarily fertile.”