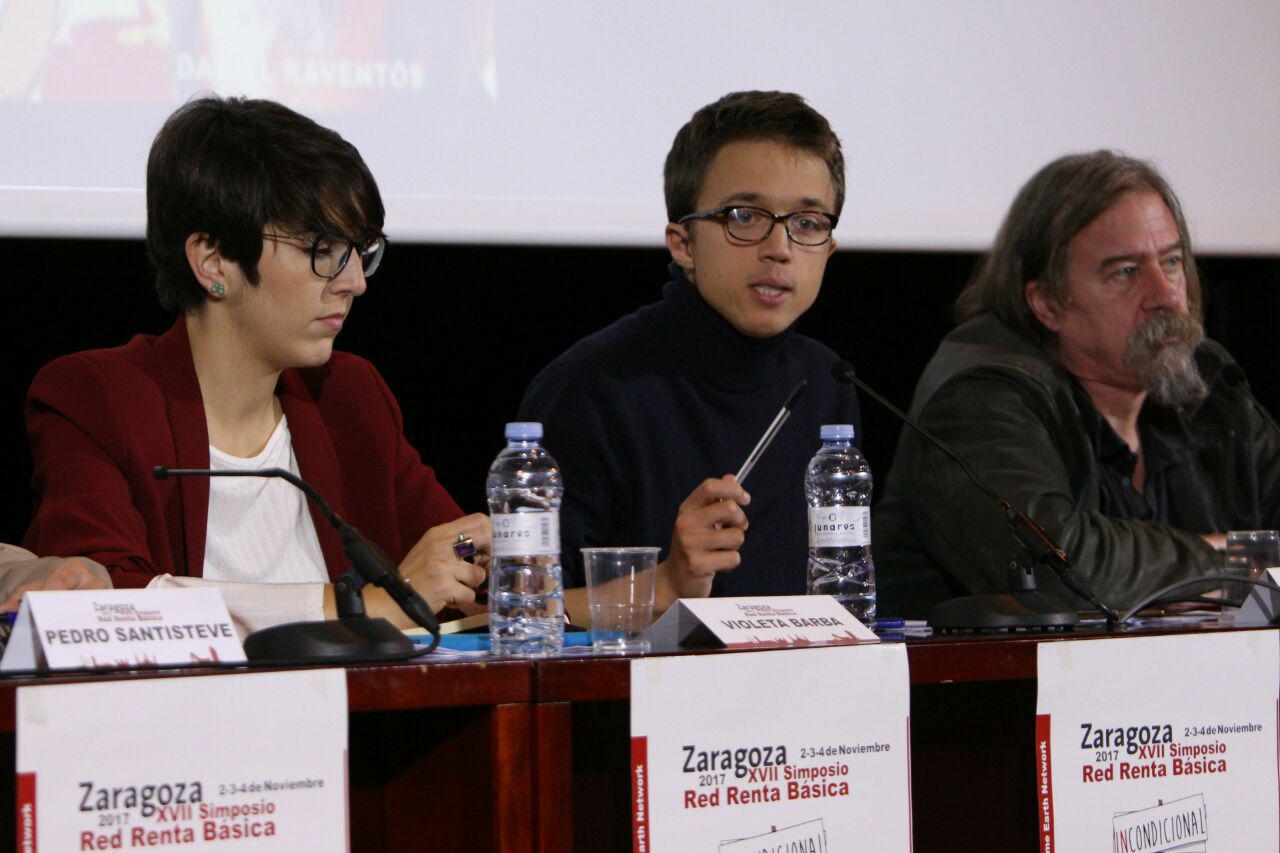 On the 2nd of November 2017, the city of Zaragoza (Spain) welcomed the 17th Basic Income Simposium, organized by Red Renta Básica (the Basic Income Network affiliate in Spain), which lasted for three days.

In the first day, during the afternoon, the documentary “In the same boat” (trailer here) was screened, followed by interventions by David Casassas (Social Theory professor at the University of Barcelona and member of Red Renta Básica), who explained the normative and technical aspects of basic income, Txema Sánchez (member of Red Renta Básica and the Nulla Política Sina Éthica collective) and Rudy Gnutti (“In the same boat” film director), who claims there is no Left nor Right basic income.

On the second day, the meeting started with a roundtable on how to finance a basic income. This was moderated by Fernando Rivares (from the Zaragosa municipality) and debated by Jordi Arcarons (PhD in Applied Economics at the University of Barcelona), Lluís Torrens (Director of Social Rights Planning and Innovation of the Barcelona municipality), alongside Raúl Burrillo and Jorge Bielsa Callau (Economy professor at the University of Zaragosa). Although it has been shown that a basic income can be financed for the Spanish reality, the financing problem has been a widely debated issue. In the afternoon, Pablo Yanes (CEPAL research coordinator in Mexico) presented his take on what has been developing as the basic income inclusion in the Mexico City Constitution.

On a second roundtable, moderated by Violeta Barba (Aragón Congress president), Daniel Raventós (PhD in Economic Sciences and president of Red Renta Básica), Íñigo Errejón (PhD in Political Science and Congressman for Unidos Podemos political party), Amparo Bella (historian, feminist and Congresswoman at Aragón by the Podemos political party) and Pedro Santisteve (from the Zaragosa municipality) debated around the bold theme “unconditional basic income”. At this moment, Santisteve approaches basic income from a constitutional right perspective. According to him, these rights shall be “locked” inside the constitution, so they cannot be tramped with by any one government. Amparo Bella then introduced basic income under a feminist perspective. This way, basic income shall value all kinds of labour, stressing that work is much more than a job. In his turn, Íñigo defended the upgrade of the welfare state, where basic income shall be the backbone of the needed constitutional reform. Finally, Raventós has pointed out that knowing about the basic income proposal is a crucial step towards supporting it, and that no one can really be free unless he or she has their material needs met.

On the last day, in the morning, the last roundtable took place. This was named “30 years of minimum income: the alternative, basic income”. The discussion then circulated around the failure to eradicate poverty through these (conditional) minimum income schemes, and around the possible alternatives. The debate was moderated by Luisa Broto (from the Zaragosa municipality Social Services) and had the presentations of Mari Carmen Mesa (Spokeswoman to Aragón Social Workers union), Sonia García (CCOO Social Action Secretary) and Julen Bollain (Euskadi Congressman and Red Renta Básica member). Mar Carmen started by showing reservations about the implementation of the basic income scheme in the short term. In the same vein, Sonia García rejected basic income in favour of a (conditional) minimum income scheme (of 430 €/month) which has been presented to the Spanish Congress by CCOO and UGT. However, Bollain argued that in fact conditional minimum income schemes have failed all around the world in the last few decades. He claimed that none of such schemes ever eradicated poverty, but still introduced unnecessary stigma, bureaucracy and administrative costs. He thinks that society must overcome these targeted, conditional policies and fight for the universal, unconditional rights that basic income represents.