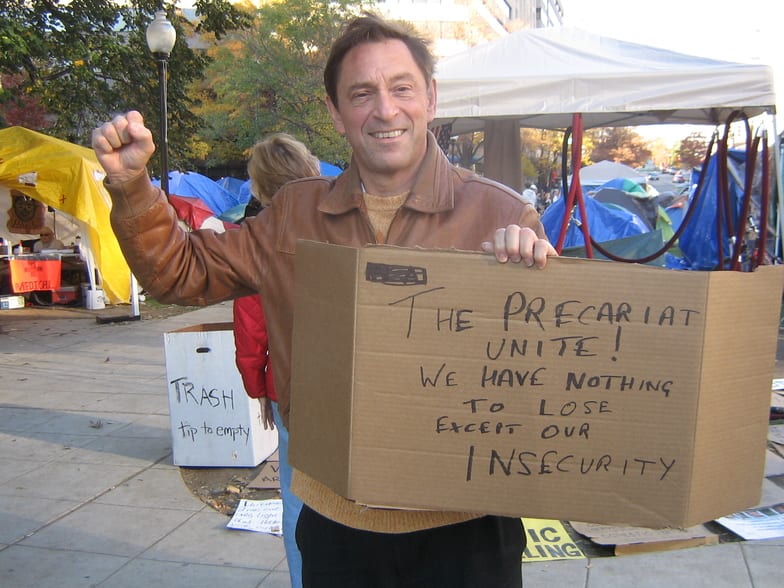 Guy Standing, co-founder of Bien and a University of London professor, in an interview for the Moon magazine says people with a precarious future are preyed upon by right-wing politicians.

Neo-liberal economic policies, “globalization, automation, and outsourcing” have, according to Standing, created a large and rising number of precariats (estimated as 40-50% of world population), who compete for low wages so much so that they can’t “pay off student loans or consumer debt, qualify for mortgages, save for retirement, or make plans for the future.”

The Moon magazine reports that Standing, in his 2011 book The Precariat: The New Dangerous Class “argued that if governments failed to satisfy the precariat class, their societies would witness increasing violence and the rise of far-right politicians – scenarios that appear to be playing out in many countries around the globe,” including the UK and the US.

Standing, whose latest book Basic Income and How We Can Make It Happen is quoted in Moon magazine saying “Right-wing politicians are playing on the fears and insecurities” of precariats by demonizing other groups, such as migrants. In this book, the precariat sits below the 62 richest people in the world (who own as much as the poorest half of the rest of the world). Other population groups are economically divided into an elite (5%, who serve the richest), the salariats (20%, who have long term employment security), the proficians (10%, who don’t necessarily want long term employment, freelancers in the gig economy), the classic proletariat (10%, who a generation ago inhabited unions), and at the bottom an underclass (5%, who are dying in the streets from social diseases).

A universal basic income would eliminate this class breakdown in favor of an economy that works for all.

Standing believes that basically the income distribution system of the 20th century has broken down. He says that societies, if they are to survive, must reduce “the inequalities and insecurities that are the terror of the precariat”.

More information at:
Leslee Goodman, “Guy Standing on an economy that works for everyone”, The Moon Magazine, Interview with Guy Standing, 2017