Earlier in July, Bündnis Grundeinkommen (BGE) was officially recognized as a national political party in Germany. The party is campaigning on a single issue: the introduction of an unconditional basic income for Germany.

BGE is now preparing for its official campaign launch event on July 29 in Berlin. The event, called BGE: Open Air, will feature a combination of talks and artistic performances. 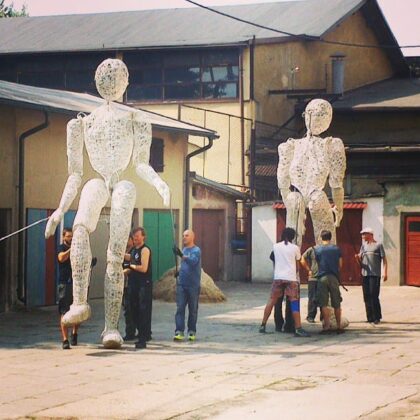 Performers include the high-wire artists of One Inch Dreams (the team behind Alexander Schulz’s recent highly publicized high-wire walk to the summit of Scotland’s Old Man of Hoy)–symbolizing balance in society and freedom with a sense of security–as well as the “gentle giant” puppets of DUNDU. The event will close with a concert from a brass jazz combo.

More information, including a detailed schedule, is available on the website of Bündnis Grundeinkommen and BGE’s Facebook event page.

Edit (July 22): This article originally stated that Helwig Fenner would represent Mein Grundeinkommen at BGE: Open Air. Since this time, Michael Bohmeyer, the organization’s founder, has agreed to speak. Founded in 2014, Mein Grundeinkommen crowdfunds money to distribute in the form of year-long “basic incomes” to individuals chosen by raffle. To date, it has awarded 99 basic incomes.