64% of Europeans would vote for basic income, poll finds 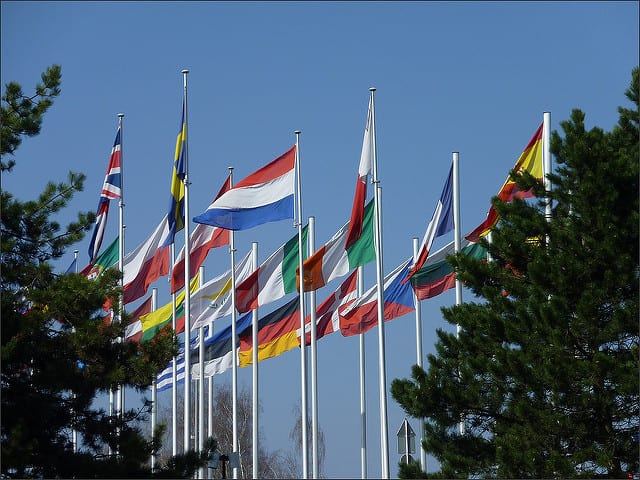 The results of a new survey polling 11,000 individuals shows unprecedentedly high support for basic income across the European Union.

Dalia Research, a Berlin-based market research company, conducted its first survey of Europeans’ attitudes on basic income in March 2016, which yielded the widely publicized result that 64% of Europeans would vote for a basic income referendum if one were immediately held in their country. The company now plans to conduct such a survey annually, and has lately released the results of its second survey, conducted in March 2017.

For its most recent basic income survey, Dalia Research interviewed 11,021 people between the ages of 14 and 65, selected from all 28 EU members states (a slightly larger sample than was used in its 2016 study, which sampled 10,000 from the same age group and geographical regions). The survey was designed to be census representative, meaning that the sample was selected and data weighted to reflect the overall demographic characteristics of the EU as closely as possible, with respect to region, age, gender, education level, and rural/urban status.

The survey has a margin of error of plus or minus 1.1% at a 95% confidence level (that is, the survey was designed such that, if it were conducted repeatedly, then on 95% of occasions the estimated level of popular support for basic income, for example, would lie within 1.1 percentage points of the actual level support among all Europeans).

Survey respondents were first posed the question “How familiar are you with the concept known as basic income?” This question was asked prior to presenting any definition of the term.

In response, 24% claimed to “understand it fully,” with another 39% claiming to “know something about it.” Another 25% of respondents stated that they “have heard just a little about basic income,” and 13% claimed to “know nothing about it.” Comparing these data to the 2016 survey, the percentage of respondents indicated that they know “something about” the idea increased significantly (up from 35%), while the percentage who had “never heard of it” decreased significantly (down from 17%).

Following this preliminary question, survey respondents were presented with a definition of ‘basic income’ to be assumed for the remained of the survey: “A basic income is an income unconditionally paid by the government to every individual regardless of whether they work and irrespective of any other sources of income. It replaces other social security payments and is high enough to cover all basic needs (food, housing etc.).” This is, verbatim, the same definition adopted by Dalia Research for its 2016 survey.

1. “If there would be a referendum on introducing basic income today, how would you vote?”

2. “At what point do you think your country should introduce basic income?”

3. “Which of the arguments FOR basic income do you find convincing?”

4. “Which of the following arguments AGAINST the basic income do you find convincing?”

5. “What could be the most likely effect of basic income on your work choices?”

Support for a Basic Income Referendum

In response to the first question, 68% of respondents said that if a referendum on basic income was introduced now, they would vote for it. In 2016, this number stood at 64%. Thus, taking into account the margin of error, support for basic income appears to have increased slightly across the EU in the past year. Meanwhile, the proportion who said that they would oppose the referendum remained stable, at 24%. 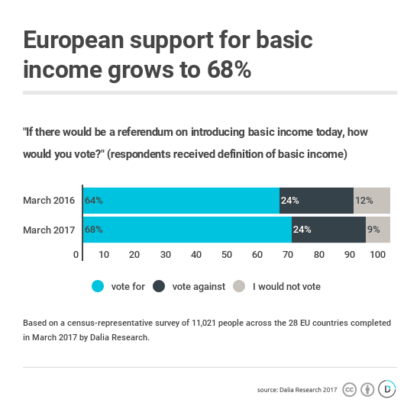 Comparing responses between the six largest European countries, Dalia Research found that support was highest in Italy, where the proportion of respondents willing to vote for a basic income referendum increased by six percentage points since 2016, overtaking the level of support in Spain (which had showed the highest level of support in 2016).

The UK (which saw an increase in support of seven percentage points), Spain, and Germany all stand at around 68-69% support. 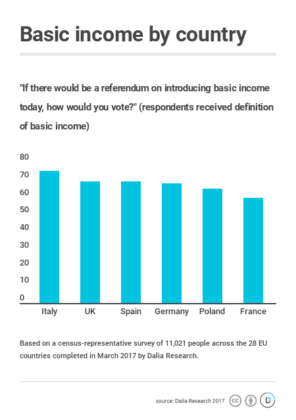 When Do Europeans Want Basic Income?

Although 24% of respondents said that they would vote against a basic income referendum held at present, only 8% stated that they think that their country should never introduce a basic income, with an additional 13% not favoring the policy for “anytime in the near future.”

At the same time, 33% supported a basic income “as soon as possible” in their respective countries, with others preferring to wait for successful experiments in their own country (32%) or in other countries (16%). 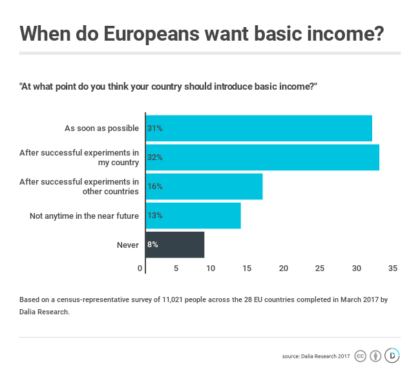 Arguments For and Against

In the next two questions, respondents were supplied with lists of six reasons that might be given for or against a basic income (respectively) and permitted to select as many as they believed to be “convincing.”

Out of the listed arguments for basic income, the three that were judged convincing by the greatest proportion of survey respondents were: “It reduces anxiety about financing basic needs” (52%), “It creates more equality of opportunity” (42%), and “It encourages financial independence and self-responsibility” (32%).

These were also found to be the three most popular “for” arguments in the 2016 survey, which examined the same list of arguments (both pro and con). However, the proportion of respondents who judged them convincing increased from 40%, 31%, and 23%, respectively. The level of support for the remaining three arguments also increased (from 21%, 21%, and 16%, respectively). 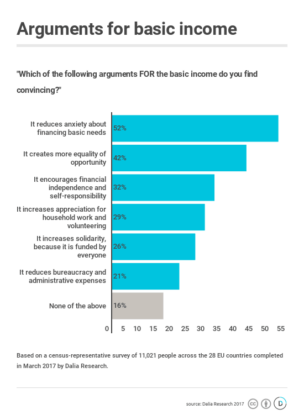 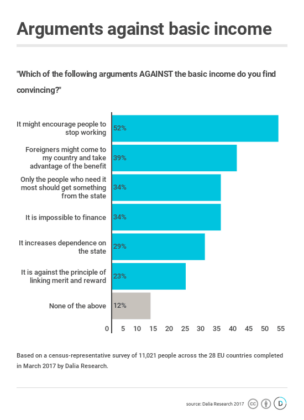 For the final question (“What could be the most likely effect of basic income on your work choices?”), respondents were required to select only one option from a list of responses. Here, 37% of respondents claimed that basic income would not affect their work choices, while 17% claimed that they would spend more time with family. The third most common response was “None of the above.” 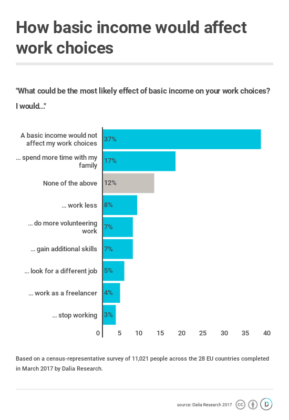 One complication to interpreting these data lies in fact that, although selection was exclusive (respondents could choose only one answer), many of the answers describe behaviors that are compatible. To give just one example, a person who choses to “spend more time with family” or “do more volunteering work” would presumably also be likely to “work less” as means of securing this end; however, “work less” was presented a distinct option. It would thus be misleading, for example, to present the results of the question by claiming that “only 11% would stop working or work less,” since other response options are compatible with these choices (and might even presuppose that respondents plan to spend less time in paid work).

Thanks to Anisa Holmes at Dalia Research for providing information and graphics for use in this article, as well as the linked pdf presentation of the results.

[1] We don’t know exactly how respondents interpreted the word ‘convincing’ or its translation in their language. Given that a sizable majority of respondents claimed to be prepared in favor of a basic income, we might assume, based on the responses above, that many did not interpret it to mean ‘decisive’.

That said, however, we might note that Dalia Research did not perform a “post-assessment” of attitudes to determine if respondents’ views on basic income changed after the presentation of the arguments for and against the policy. Indeed, we should not assume that being alerted to these arguments would not cause respondents to change their assessment of the policy proposal through the course of a survey. (In this vein, we might mention that a survey of likely San Francisco voters conducted in April 2016 found that respondents changed their opinion on basic income after more policy specifics were stated, becoming overall less supportive.)