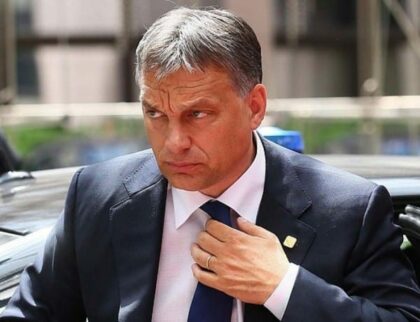 Viktor Orbán, Hungary’s prime minister, made reference to basic income in his speech at the Hungarian Chamber of Commerce and Industry, held on 28 February, 2017.

The speech itself is very much focused on economic issues, centred on the Hungarian reality. Orbán, however, also offers comments about his vision for Hungarian society and energy investment in the near future. Regarding society, Orbán portrays a vision of a homogenous racial and cultural profile, in which all jobs are performed by Hungarians. In fact, he repeats the word “homogeneity” seven times in the speech within this context. On energy, he firmly supports a nuclear-powered “cheap energy” economy, despite the fact that other nations are divesting from nuclear, with nearby Germany, for example, having closed eight reactors in six years.

Most notably, Viktor Orbán refers to basic income midway through his speech. He starts out by labelling it as “communistic” and “some sort of basic benefit or pay – or something like that”. According to him, “this is an utterly unthinkable approach”, which nonetheless is being pursued in countries like Finland, Canada, and the Netherlands, and seriously discussed even in the United Kingdom. Orbán continues to declare that Hungary would “close shop” if something like basic income were to be implemented. He claims that it would mean Hungary would slip “back to the culture of benefit-based economies”, in what seems to be a reference to communist times. It would also, he warns, bury the “work- and performance-oriented culture based on merit”, and thus, under such a system, “investors can go to another country with their capital investments, because here they could only go bankrupt”. The assumption that people would become idle given a basic income seems to run deep in Viktor Orbán’s view. He concludes his critique of the basic income concept with the following words:

“So I propose that we protect ourselves in a timely fashion – firmly based on foundations of common sense – against these socialistic ideas, which originate from Heaven knows where. […] We don’t have the means or the capacity to distribute money without performance and work in return. We have the means and capacity to build a system in Hungary which is fundamentally based on competitiveness, performance and merit, while also asserting fairness and social and humanitarian criteria. If we undermine these philosophical foundations of the Hungarian economy, we won’t be able stay alive. So in this respect I earnestly ask you not to give in to any kind of political temptation, or to such siren voices.”