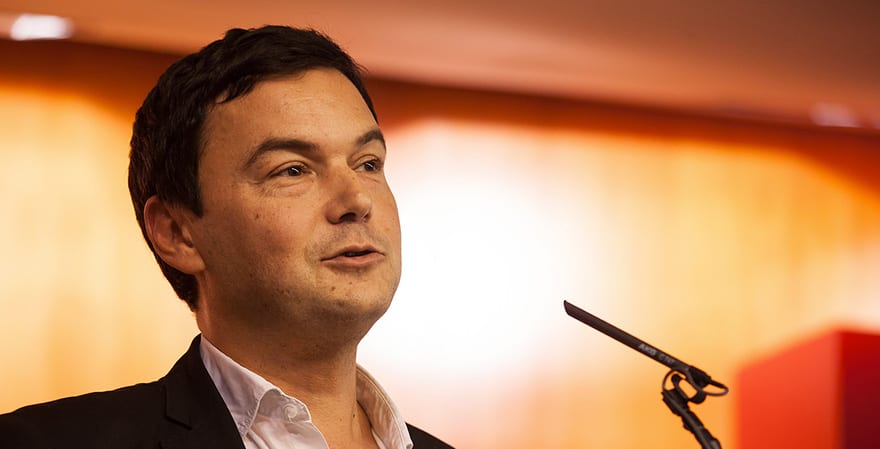 Renowned French economist Thomas Piketty, best known for his 2013 book Capital in the Twenty-First Century, has been making headlines for his positive comments regarding basic income in a number of blog posts. However, the approach he proposes is not basic income as it is commonly understood.

In a blog post published on 13 December, Basic income or fair wage?, Piketty states that while he’s pleased to see such consensus across the political spectrum on the idea of a minimum income within France, discussions of a basic income and its specific level are not radical enough – that such conversation “leaves the real issues unexplored and in reality expresses a concept of social justice on the cheap.” He points instead towards progressive taxation, fairer approaches to education and fair pay and control within corporations as topics deserving focus.

Returning to the question of basic income, Piketty raises what is essentially an important administrative concern. He notes that, at present, employees earning the minimum wage rate in France have their taxes and social contributions deducted from their wages at source, putting their net wage below the threshold for social assistance. However, the worker must herself apply and wait several months to receive the social assistance necessary to bring her income back up to the minimum level. Piketty seems to be concerned that such inefficiencies and poverty traps would proliferate under a basic income scheme.

Then, on 25 January, a collection of prominent researchers, including Piketty and famous sociologist Dominique Méda, published in ‘Le Monde’ a call in support of Benoît Hamon’s basic income proposal – Pour un revenu universel crédible et audacieux [For a credible and audacious universal income]. Some news organisations quickly followed with headlines claiming Piketty had endorsed basic income, yet the scheme it describes is not what we would ordinarily understand as basic income (and certainly strays from BIEN’s definition on a number of points).

To begin, the researchers defend an interpretation of Hamon’s basic income scheme that may not be entirely accurate, stating:

“Benoît Hamon never said that he would pay 500 euro a month to 50 million adults. On the contrary, he has explicitly noted the fact that the new system could be subject to resource conditions and concern only wages of less than 2000 euro, with amounts that would clearly not be the same for all.”

However, as we have covered here and here, Hamon does indeed hope to ultimately offer a full basic income, and while his steps towards such full implementation have been modified somewhat over the course of his campaign, the first step he proposes is for a basic income to be paid to those between the ages of 18 and 25, unconditional on resources or low wages.

Piketty’s administrative concern again arises here, with the authors claiming that “it would hardly make sense to pay 600 euro a month to those earning 2000 or 5000 euro a month, to then immediately take back the same amount by increasing their taxes.” This leads the piece to end with an argument for “basic income” to be provided essentially as tax credits on the payslips of the stably employed.

In response to requests for clarification following this post, Piketty published another blog post on 30 January – Notre revenu universel est-il vraiment universel? [Is our universal income really universal?]. In this article, Piketty clarifies his recommendation, suggesting that it would be most efficient to establish different methods of payment of the basic income dependent on different employment circumstances:

“We believe that it is high time to move away from the comfortable abstractions that often characterise this debate, and finally to say precisely how it is possible to proceed. In this case, the solution we propose is to pay the universal income in a mixed form. For all those without jobs, or who only have a very part-time job, or indeed whose job is divided between multiple small employers or contractors, then there is no other solution than to pay the universal income in the form of an allocation managed by public agencies.”

Piketty claims, however, that direct payment of an income top-up on stable employees’ payslips is to be preferred, where feasible, because it links the idea of basic income with that of a fair wage and because, in practical terms, he does not believe the basic income payment would be as simple and automatic as the top-up.

Nicole Teke, public relations coordinator for the French Movement for Basic Income (MFRB), has the following to say:

“Even though he clearly shares the spirit of UBI in terms of establishing an income floor for everyone, his proposal would create further polarisation of the labour market by having a two-speed system for stable workers vs. unstable workers and the unemployed. This contradicts the principle of universality of basic income.”

MFRB have laid out a number of responses to Piketty’s comments here. This includes a useful side-by-side comparison of one of MFRB’s basic income proposal and Piketty’s suggested scheme, and an analysis of the potential perverse effects of the latter.

Looking at basic income from a narrow perspective

A common thread through these three articles seems to be Piketty’s belief that basic income, when implemented, would amount to a mere increase of the amount of money eligible citizens could apply for, with no change to its bureaucratic system of administration. He then repeatedly contrasts a system whereby the full “basic income” is listed on stable employees’ payslips, along with the relevant taxes that partially or fully outweigh this amount, with his preferred system of simply listing the balance, if any, owed to the worker.

This preconception of how basic income would be implemented seems to be partially motivated by his own preference regarding the message a basic income would communicate: that work is valuable, and basic income is a way of offering a just salary and equitable remuneration for work. He also espouses a belief that working life won’t change in response to automation and “Uberisation” as much as others suggest, so we should prefer top-up payments on payslips to a separate, standardised basic income system for all, paid directly by the government.

As Nicole Teke of MFRB concludes:

“By focusing on the financial distribution effect of UBI, Piketty misses the bigger point of UBI: to emancipate citizens. Despite his good intentions in fostering the debate, Piketty has created somewhat more confusion on the definition of universal basic income, which MFRB has tried to establish as a standard in the debate in France.”