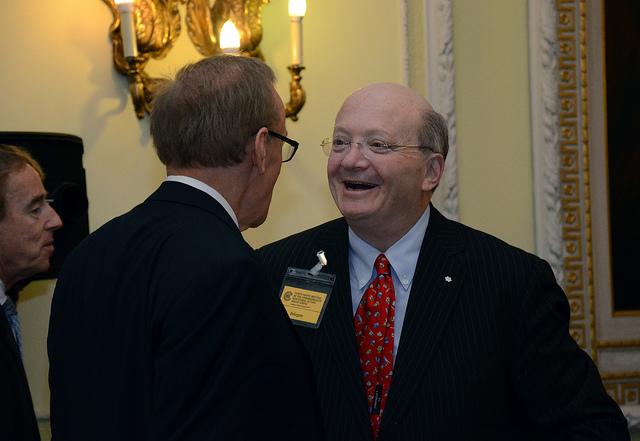 Ontario’s provincial government is on track to begin a pilot study of a guaranteed minimum income, according to the latest comments by former Conservative senator Hugh Segal. A more detailed report will be available in mid-September.

In June, the government of Ontario appointed Hugh Segal — a long-time proponent of a guaranteed income — to advise officials in the design and implementation of the pilot study, which is currently on track to begin before April 2017.

The pilot is designed to test a guaranteed minimum income, in which participants’ total incomes are topped up to above the poverty line. This income subsidy will supplement any support received from existing anti-poverty programs, which will not be eliminated or replaced during the pilot.

Thus, although it is often referred to by the term ‘basic income’, the policy to be tested in Ontario should be distinguished from the commonly discussed “demogrant” model of basic income, wherein all individuals receive a regular payment of the same amount, regardless of other earnings or total income. Ontario will be investigating a program that supplements the earnings only of individuals whose incomes are below a certain level (e.g. the poverty line). In this respect, the pilot is similar to Manitoba’s well-known “Mincome” experiment of the late 1970s.

As under a demogrant model, however, there would be no work requirement or other conditions that poor Canadians would need to meet to qualify for the guaranteed minimum income. All would be eligible, whether working or not.

According to CBC News’ most recent report (dated August 30), Segal has suggested that the government could run two types of pilots: one in a small community in which the entire community would receive a guaranteed income (as was the case in the Mincome experiment), and another involving a sample of individuals within a large community. The latter design would allow the beneficiaries of the guaranteed income to be compared against a control group, as in the recently-announced design of the basic income experiment in Finland.

Statements in the CBC’s article suggest that the participation in the pilot will be voluntary [1]. This would contrast with the Finnish experiment — in which, as a measure to prevent bias in the sample, participation is mandatory for those individuals selected to participate.

The CBC News report also notes Ontario will not receive direct financial support from Canada’s federal government — despite the fact that the majority Liberal Party endorsed guaranteed annual income as party policy at its convention in May. The provincial government itself has earmarked $25 million for the pilot.

According to CBC, Segal is planning to publicize a preliminary report on the pilot project in mid-September, making it available for three months of public consultation.

[1] Context: “…the pilot will not eliminate or consolidate existing poverty-reduction programs, but rather be designed as a top-up to such programs to lift its voluntary participants above the poverty line [emphasis added].”

Addendum (December 8): In light of the continued high frequency of view of this post, we note that the report in question was published on November 3. See the Basic Income News summary — and links to the full report — here.