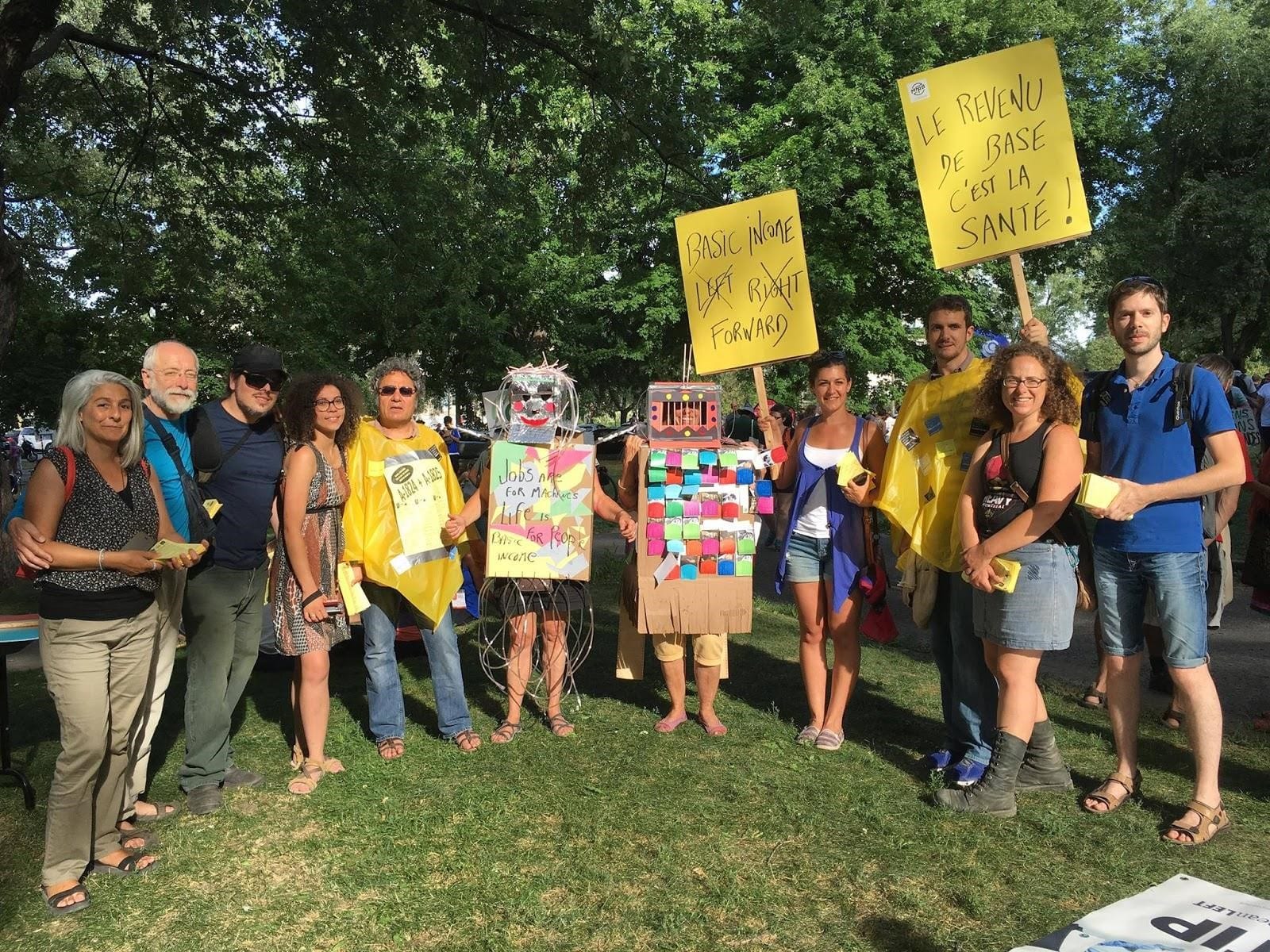 Basic Income Québec (RBQ) and the French Movement for a Basic Income (MFRB) had been preparing for the World Social Forum (WSF) event for almost a year. Their efforts paid off – the activities organized by the France-Québec team were an unmitigated success. For the first time ever, basic income achieved prominence at WSF, reflecting the growing worldwide interest in the idea.

The six members of the MFRB delegation teamed up with their counterparts of RBQ in order to organize several initiatives centered on basic income at the WSF in Montreal. 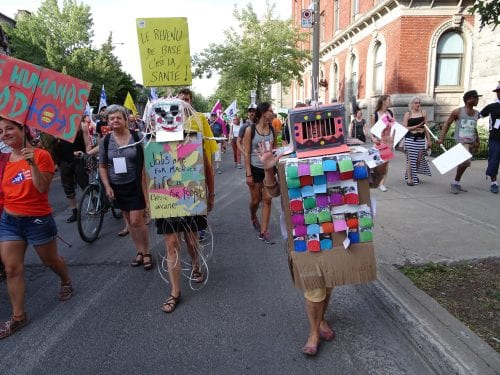 A wild workshop, a prelude to the Create-a-thon planned for Tuesday, August 9th, led to the creation of two robots (a concept developed by the MFRB local group of Lyon) along with signs and ponchos for the opening march taking place that day in Montreal, from Lafontaine Park to the Place des Arts that attracted about 15,000 people.

Marcus Brancaglione, Brazilian guest from the ReCivitas association, joined the jubilant “gang” of dozen-or-so activists who merrily spread the word about the program for the week, inviting passersby to come and take part in the workshops, conferences and debates.

The robots attracted quite a bit of attention. They were a big hit…or as the co-founder of RBQ (Luc Gosselin) put it, they “made a splash,” using a Quebec expression. They served as a rallying point throughout the week.

On the morning of August 10th, the group took possession of the two rooms that were graciously provided by the University of Quebec in Montréal (UQAM), enabling them to welcome more than two hundred motivated participants during the three days (excluding the Grand Conference). 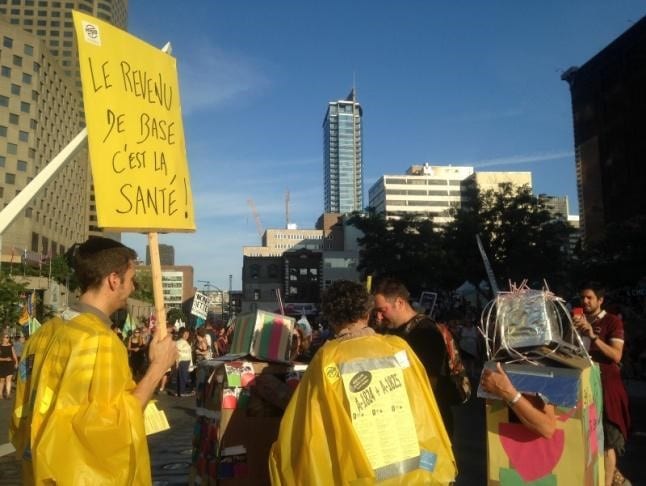 Create-a-thon. Eighteen hours of creation. Fourteen stories from around the world. 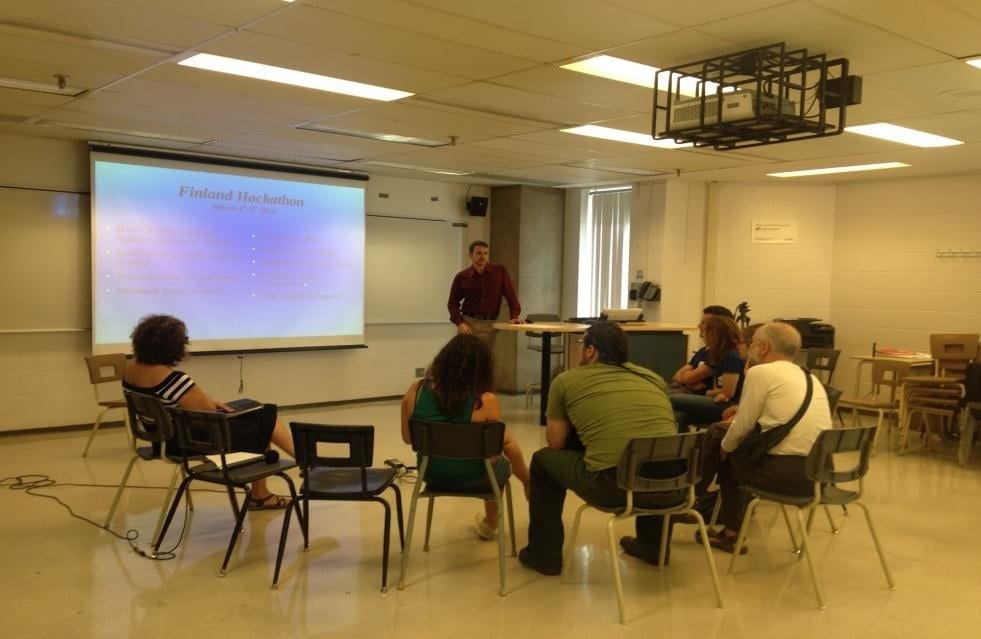 The creation marathon was organized by the RBQ team. This two-and-a-half day event began with Lenny Watson’s presentation on the first Create-a-thons organized in San Francisco, Los Angeles and Finland.

Following an exchange between participants, an idea emerged. Inspired by a participant’s story about her mother, they began collecting stories of people they knew and explaining how a basic income would change their lives. 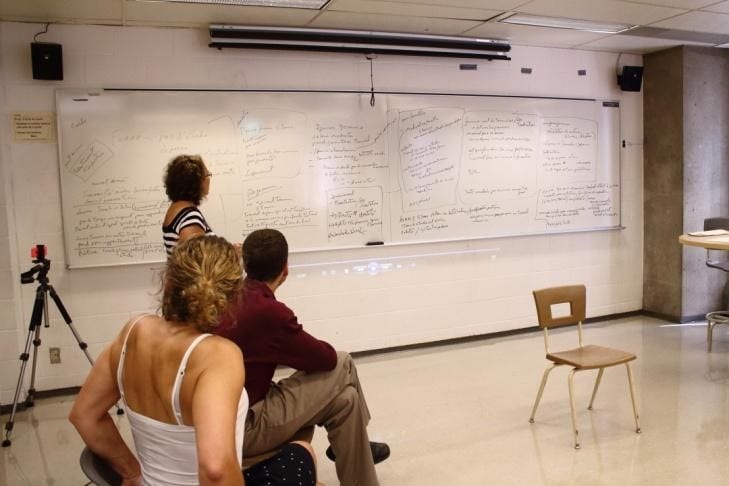 They started filming the next day. Aurélie Hampel handled video while Louise Allaire did the scripting and by day’s end 14 stories had been made, thanks to the many people who dropped by. Each told their story, stories from around the world, in their own language: in English, French or Portuguese.

On Friday, Aurélie and Louise pulled out the key themes and words from these stories. They were grouped into five chapters.

The following themes were chosen:

A basic income… when life is merciless

A basic income… to find one’s place in life

A basic income… in case of extreme poverty

A basic income… freedom to choose your own path in life

All videos will be available on the MFRB YouTube channel, by the International Basic Income Week. 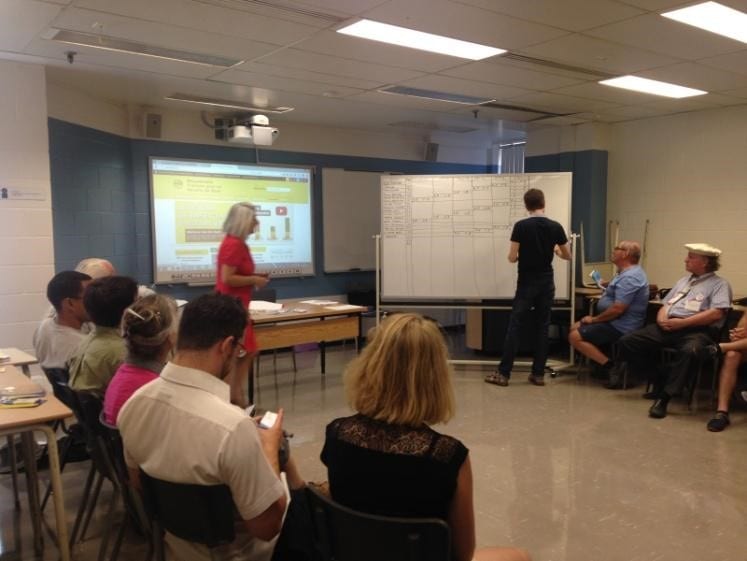 The goal of the Ğeconomicus workshops was to promote the idea of changing our money system to bring about basic income without getting mired in politics and to start changing our debt-money-induced behaviour.

Carole Fabre and Damien Vasse hosted two game sessions, testing different monetary systems through card-playing. To sum up, each player exchanged cards with others to form squares. Each square represented a created value and was accounted for with a piece of candy (a new candyless version is possible. See website).The number of created value was tallied up at the end.

With two and a half hours set aside for each workshop, they changed the rules and reduced human lifespan to 60 years as well as the duration of each round of play. They then played using a monetary system based on debt–today’s current system – and using a monetary system based on basic income and open money. Other systems could also be tested, such as barter and mutual credit, but they were unable to do so due to time constraints.

This game helps us understand how the structure of the monetary system affects our behaviors and exchanges.

Debt-money is boisterous and full of competition, trickery and knavery. With open money, tensions subside after two rounds, cooperation emerges and the ambiance changes. They were able to set aside over half an hour at the end of each workshop for a post-game discussion and debate. It was very rewarding each time, as people became aware of the debt-money trap and the unbelievable power of banks. With basic income in money creation, people saw that it was still possible to create value, but with a different behavior.

Co-creating our basic income using open money is finally possible, thanks to Duniter, an open money generator that took four years of work by developers and coders to make it fully operational. Now that it has proven successful in computer simulations, it is ready for the real world. The game provides an opportunity to show people that the system works and that it is up to us to make it happen.

The two convergence assemblies were developed and facilitated in cooperation with Pierre Barbès and Gilles Charest, sociocracy experts at l’École Internationale des Chefs. The aim was for these meetings to be as inclusive as possible and to make people aware of the working methods we used by the MFRB, with a focus on sociocracy. 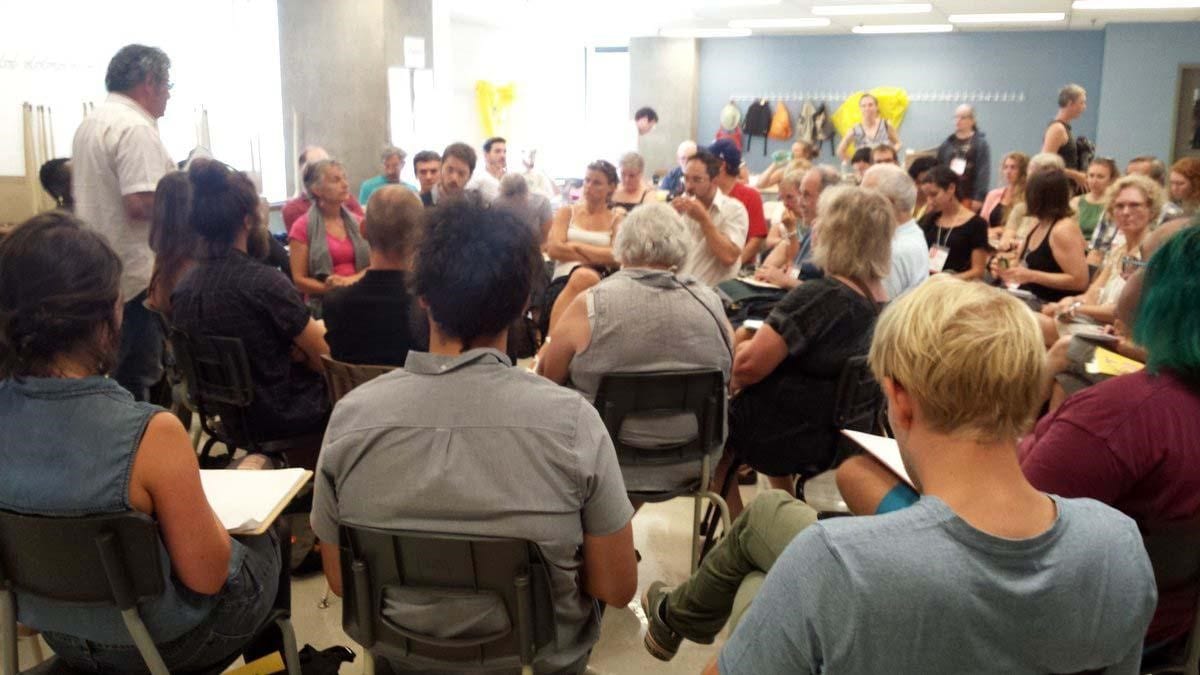 The conference ended with a round table giving everyone a chance to share what they gained from the workshop. 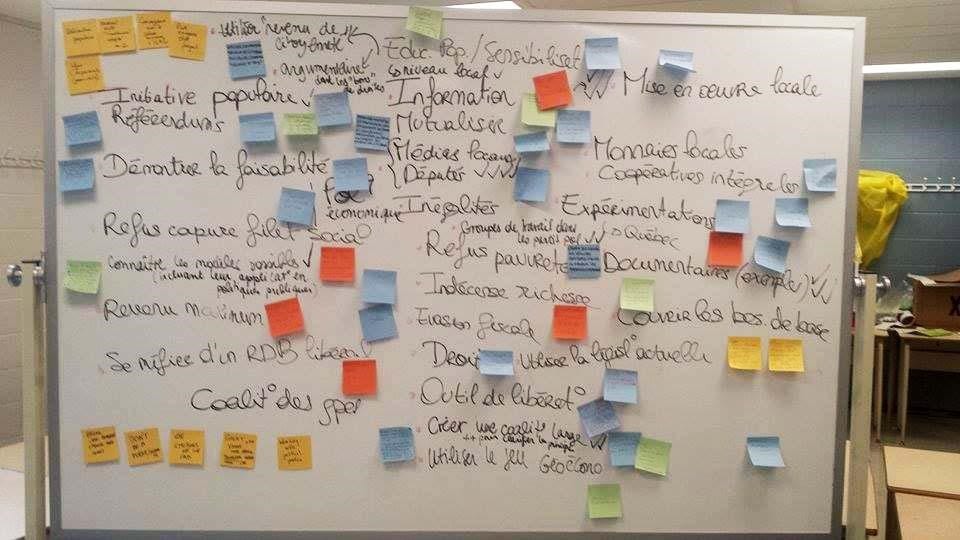 The idea for the assembly came from the Forum’s Health Space Committee, which two members of Basic Income Quebec took part in. The committee consisted of Quebec health professionals. RBQ wanted to ensure that one of the determinants of health – income – would be discussed and that everyone knew about the proven efficiency of basic income in areas where pilots had been conducted. Committee members were very receptive to the idea, as many of them were already familiar with the concept of basic income.

RBQ considers it as an important strategic step in Quebec. The group would like to see Quebec health professionals adopt a position in favor of basic income, just like their English Canada counterparts, both within their organizations and individually. The English group played a key role in the Ontario government’s decision to launch a basic income pilot, which is currently being developed.

The meeting reflected the keen interest in basic income by people from different countries who are primarily concerned with health, either as professionals or as citizens. Various courses of action were suggested.

Workshop: “On the Equitable Sharing of Wealth: Considering a Universal Basic Income and Maximum Wealth”

Many people pre-registered for this workshop as soon as it was announced, and it drew an at-capacity crowd. Wealth-sharing is an issue that has been addressed in various ways at the Forum. A universal allowance (or basic income) is an often-mentioned way to perform this sharing function in our societies. Maximum wealth has the same goal, but is less present in the public space. As a result, the majority of participants came to the workshop with a better grasp of basic income than maximum wealth. The similarities between the two ideas generated a lot of interest and lively debate with both facilitators, Alexandre Chabot-Bertrand and Christian Jobin. The exchanges continued long after the workshop had ended.

The activities were concluded with a grand conference attended by nearly 500 people on the evening of Friday, August 12th. The speakers, each from a different country and approaching the issue of basic income from different perspectives, made quite an impression by their presence, their passion for the issue and their humor. 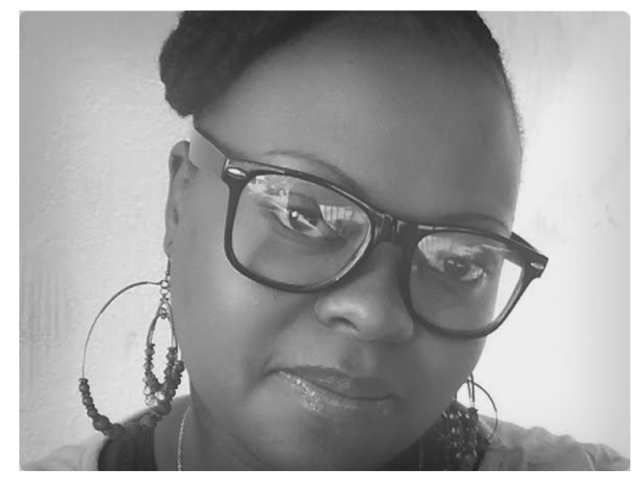 The conference began with a video from South African partner, Nkateko Chauke, Basic Income Grant Campaign Coordinator for the SADC (South African Development Community, which includes fifteen countries ranging from Tanzania to South Africa), who unfortunately was not able to attend. Watch the video here. 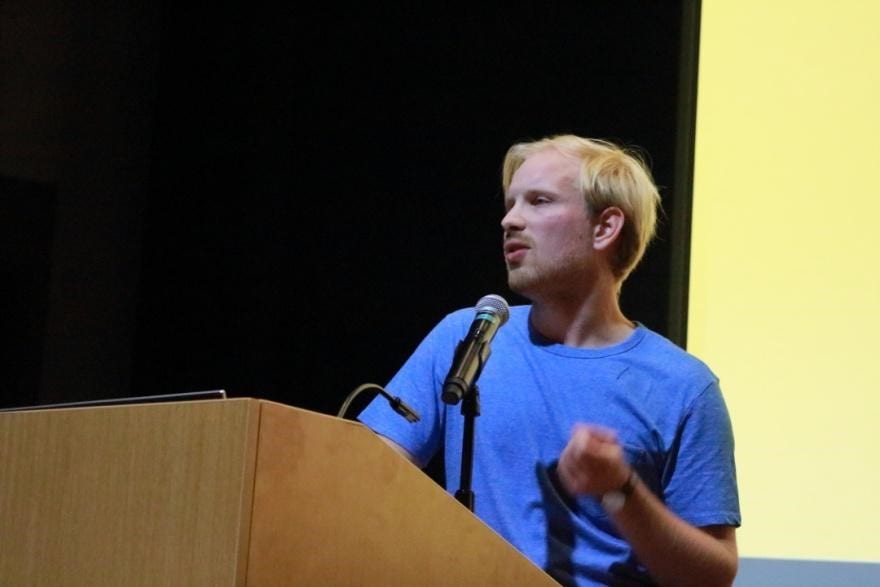 Rutger Bregman, Dutch journalist and author who recently published his book, Utopia for Realists: A Case for a Universal Basic Income, Open Borders, and a 15-hour Workweek, led off the discussion by addressing basic income from a labor perspective

Rutger Bregman, Dutch journalist and author who recently published his book, Utopia for Realists: A Case for a Universal Basic Income, Open Borders, and a 15-hour Workweek, led off the discussion by addressing basic income from a labor perspective. He questioned the moral imperative to work in a world that promotes the creation of what David Graeber calls bullshit jobs, referring to those pointless jobs, both for the people performing them and for society as a whole. 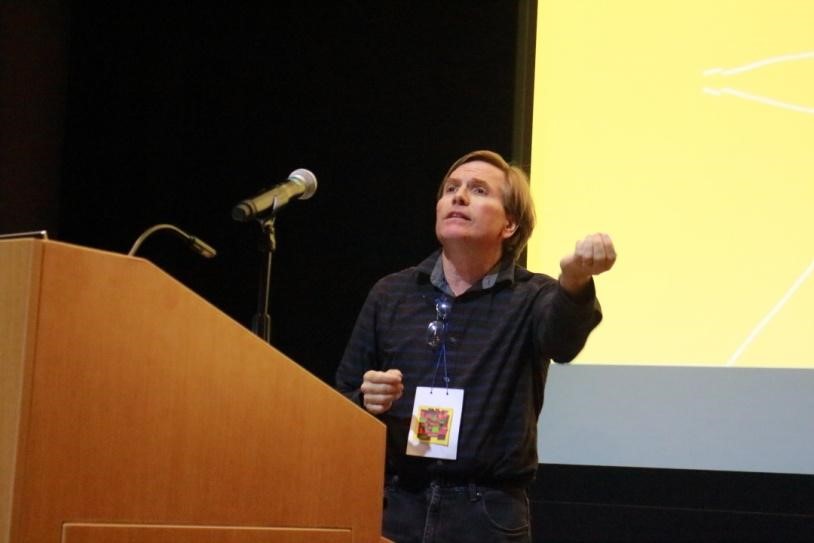 Karl Widerquist, from the United States and co-chair of the Basic Income Earth Network (BIEN), then spoke about the three successive waves of basic income in our history

Karl Widerquist, from the United States and co-chair of the Basic Income Earth Network (BIEN), then spoke about the three successive waves of basic income in our history. A first wave took root in the twentieth century (although the idea had already been discussed by the likes of Thomas Paine or Thomas More), especially in the Anglo-Saxon countries with advocates such as Bertrand Russell, George Henry and Virginia Woolf. The arguments at the time dealt primarily with principles of social and agrarian justice. The second wave emerged in the 1960s, with basic income being championed mainly by civil rights activists – Martin Luther King being the most eminent example. We are now in the third wave, which calls into question the current system, the conditionality of social welfare and our response to the changing nature of work. These changes have led to a wider acceptance of the idea, with more and more people showing an interest for it, including politicians and journalists. 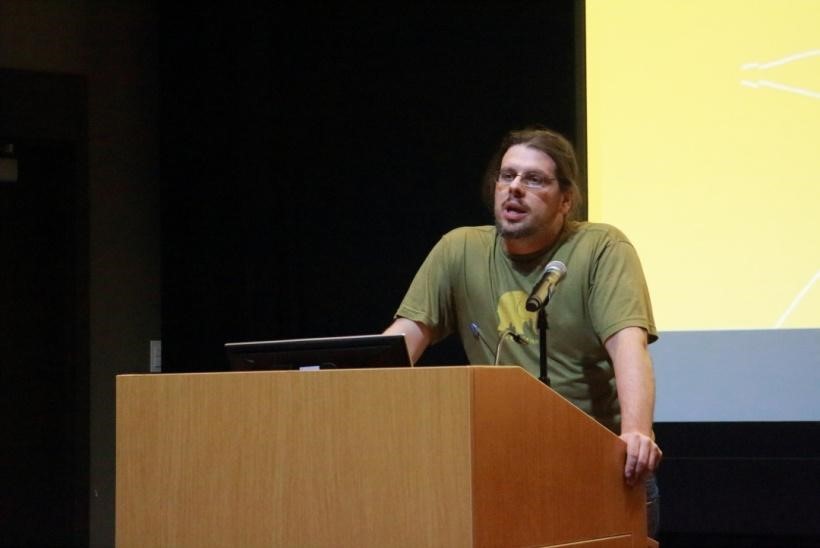 Marcus Brancaglione, president of the ReCivitas association, presented the project being conducted in the town of Quatinga Velho in Brazil since 2008

Lastly, to demonstrate the potential of basic income, Marcus Brancaglione, president of the ReCivitas association, presented the project being conducted in the town of Quatinga Velho in Brazil since 2008. Marcus Brancaglione views basic income not just in terms of a pilot project but as a fundamental human right because he believes that poverty exists in society only because we allow it to. Brazil is the first country to have it enshrined in its Constitution as a long-term goal. The time has come to implement it.

The three speakers were very well received by the very engaged and enthusiastic audience. Hundreds of hands were raised throughout the discussion, as a lot of people wanted to ask questions and to share their thoughts on what a basic income would mean for them.

All these wonderful, diversified and varied initiatives helped spread the word about basic income throughout the world, clearly marking this year’s edition of the World Social Forum in Montreal.

Thanks to all those who helped make this event a success for basic income around the world!

Article translated from French into English by Didier Di Camillo.