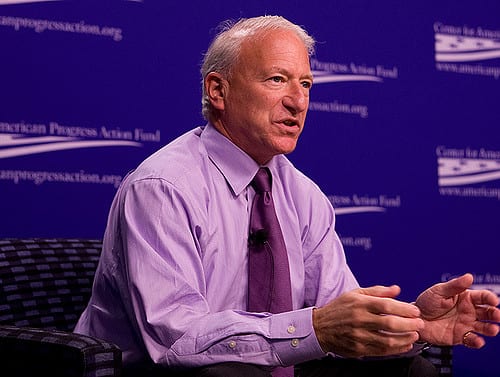 Andy Stern, the former president of the SEIU (Service Employees International Union), has written a new book on basic income: Raising the Floor: How a Universal Basic Income Can Renew Our Economy and Rebuild the American Dream. This upcoming book was previously announced on Basic Income News, and it remains true that the book will published on June 14, 2016. We now get to say, however, the book will be released next week.

In his new book, Stern investigates the current and projected state of the labor economy — focusing especially closely on the effects of new technologies — and argues that we need to adopt a universal basic income to prepare to massive disruptions in the job market of the not so distant future. Along the way, he talks to “economists, futurists, labor leaders, CEOs, investment bankers, entrepreneurs, and political leaders” about their predictions for economic change in upcoming decades. 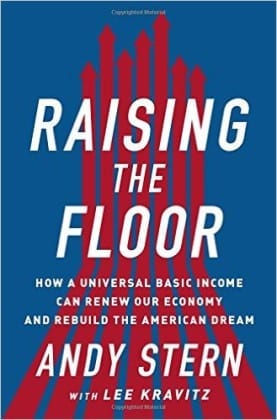 Trade unionist Andrew Brady recently conducted a short interview with Andy Stern about the book, which can be viewed here. Stern notes that “we’re about to face a time of major economic disruption” — “a tsunami of change” — when merely tinkering with current policies and programs, such as adopting stricter labor laws, “will not be sufficient to solve workers’ problems.” Thus, “we need to guarantee that there’s a floor” for workers, even though there might be work on top of it.

Stern further elaborates on these issues in an article for Daily Caller, in which he remarks on the outcome of Switzerland’s June 5th vote on basic income.

Today’s economic pain though may only be a warm-up to more anguish if we fail to act boldly, and expediently. There is now quite reputable research on the potential disruption of software and AI; an Oxford University study predicting the loss of 47 percent of all U.S. jobs by 2033; Boston Consulting Group estimating up to 25 percent by 2025; McKinsey Global 45 percent elimination of all present tasks, with artificial intelligence reducing 13 percent more, could be harbingers of a future of increased economic peril.

Indeed, as he describes in a post on The World Bank’s Jobs and Development blog published last April, these changes in the economy played a large role in Stern’s decision to leave his prestigious post in organized labor. (He is now a Senior Fellow at Columbia University.)

I didn’t resign from SEIU because I was bored. Rather, after nearly fifteen years at the helm of SEIU, I had lost my ability to predict labor’s future. I could do that in the 1990s and early 2000s. But, by 2010, the economy was changing and fragmenting at such warp speed that I couldn’t see where it — or labor — was headed. At the end of that year I embarked on what became a four-year journey to discover the future of jobs, work, and the American Dream.

Already, the new landscape of work is populated by free agents and temporary workers who have more freedom and flexibility in their work life, but no job security and significantly less leverage with the people and companies who hire them. My focus turned to larger questions: If there are significantly fewer jobs and less work available in the future, how will people make a living, spend their time, and find purpose in their lives? Also, how can we keep the income gap from growing so wide that it erupts into social discord and upheaval?

I believe there is a solution – the universal basic income or UBI.

This blog post, “Moving towards a universal basic income,” is an extract from Raising the Floor, and it’s well worth reading in its entirety as you wait for the book to arrive.

The philosopher and political economist Philippe Van Parijs — well known in these parts as a cofounder of BIEN — calls Raising the Floor “a stunning combination of lucid analysis, up-to-date information, and lively dialogues that culminates in a bold proposal for universal basic income.”

Andy Stern with Lee Kravitz (2016) Raising the Floor: How a Universal Basic Income Can Renew Our Economy and Rebuild the American Dream, PublicAffairs.

Picture of Andy Stern from Ralph Alswang via flickr