SWITZERLAND: National Referendum will be held on Basic Income 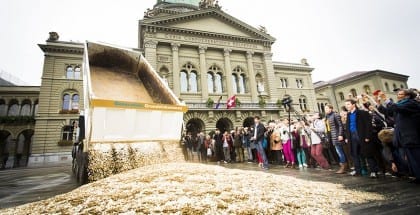 Following a successful campaign aiming at collecting more than 100,000 signatures, Switzerland will hold national referendum to vote on basic income.

On October 4, 2013 activists delivered more than the necessary 100,000 to call for the vote. The organizing committee for the initiative has been collecting signatures for months in preparation for this event. The proposal is for a substantial basic income of 2,500 francs ($2,756US) per month for every adult legal resident of Switzerland.

Along with the signatures, supporters held a large demonstration outside the Federal Palace in Bern. At the demonstration they dropped a dump truck load of 8 million five-rappen coins, one for each person living in Switzerland (see video below). Assuming the signatures are valid, the government is now obliged to schedule a vote in the near future.

For more on the initiative see:

If you know of other stories on this issue, please leave the full info and link in the comments section. Please note what language the story is in.

Follow
3 comments Switzerland
The views expressed in this Op-Ed piece are solely those of the author and do not necessarily represent the view of Basic Income News or BIEN. BIEN and Basic Income News do not endorse any particular policy, but Basic Income News welcomes discussion from all points of view in its Op-Ed section.